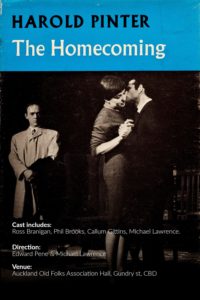 In an old and slightly seedy house in North London lives Max, the aging, loud and crude patriarch, his ineffectual brother Sam and two of Max’s three sons, – Lenny, a small-time player in the west end and Joey, who has high hopes of being a professional boxer and sidekick in the weekends for Lenny. Into this dysfunctional abode arrives the eldest son Teddy, an apparently successful professor of philosophy in America. After six years abroad, Teddy has brought his wife home to visit the family for the first time since they married. His literal ‘homecoming’ becomes more of a  suggestive homecoming for Ruth. In Pinter’s creative way, tension mounts, with deceptive accusations and proposals to Ruth.

Considered one of Pinter’s most enigmatic plays, it explores issues of sex, power, delusion, compressed anger and the female role in a very recondite, yet enthralling, manner.

“Half a century after it put Harold Pinter at the forefront of British drama, The Homecoming can still leave audiences so provoked, puzzled and pleased” The Times